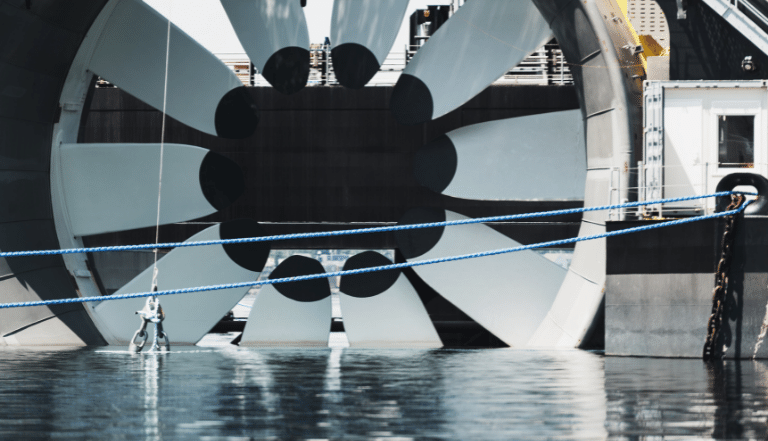 When we think about sources of renewable energy, it’s usually wind turbines and solar panels that come to mind. In fact, it is the oceans which are the world’s largest source of untapped energy, according to Ocean Energy Europe (OEE), a not-for-profit representing Europe’s ocean energy sector. And by 2050, up to 10% of Europe’s current electricity usage could be met by our oceans, sufficient to power an impressive 94 million households a year. To put this into some kind of perspective, in 2021 24.2% of the UK’s electricity was produced from wind turbines, with solar providing around 4%.

With zero emissions, and the potential to be 100% carbon neutral, the global market for ocean energy technology is an estimated 53 billion Euros annually, and thanks to recent investment and innovation, Europe is in a great position to dominate.

Ocean energy can be loosely divided into five core technologies: wave energy, which harnesses the rise and fall of wave motion to generate power; tidal stream, in which the lateral flow of the tides drives turbines; sea water air conditioning (SWAC), where ocean water is used to heat or cool a freshwater loop; ocean thermal energy conversion (OTEC), which produces energy from the temperature differential between cold deep water and warmer surface water; and salinity gradient power generation, creating energy from the difference in salt concentration between fresh and salt water.

According to a recent OEE report, in 2021 Europe created an additional 2.2 MW of tidal stream capacity. Development projects included a number of new devices, one of which was developed by Scottish company, Orbital Marine Power. Orbital’s patented tidal stream turbine, the O2, is a 2MW+ device which has been providing low carbon electricity to the UK power grid since 2021. New deployments, for example, off the south coast of the Isle of Wight, are planned over the next few years. Described as “the world’s most powerful tidal turbine”, the O2 device includes legs which lift to the water surface for easy maintenance.

Another tidal stream device, created by Swedish company Minesto, generates electricity from low-flow tidal currents via a winged “kite”. The wing uses lift generated by the underwater current to move the kite, which is steered in a figure of eight pattern, driving the turbine through the water and creating water flow several times higher than the actual current speed. As of April 2021, Minesto had a portfolio of 92 patents covering its ocean energy technology, some of which has been deployed in a project in the Faroe Islands.

2021 also saw an extra 681 kW of wave energy installed in Europe, in five separate deployments using four very different device types. Norway-based company Havkraft’s HWEC device was installed at Haddal, Norway, and uses oscillating water column technology. First patented in 2013, the device comprises a number of chambers; as water columns within these chambers rise and fall, pressure and vacuum are generated and captured by the turbine at the top of the chamber.

Scottish company Mocean deployed its “attenuator” type Blue X device in Orkney. The Blue X is essentially a raft comprising hinged segments which sit on the water surface and move parallel to the wave motion, so that the relative movement of the segments creates energy. Mocean has a number of patent applications pending worldwide covering its technology, including in Europe. Slow Mill, a Dutch company, launched at Den Helder in the North Sea. Their patented device is a “point absorber” type which includes an anchor mounted with a blade system and a floater. As waves push the floater up and the blades away from the anchor, the device utilizes both the up and down and back-and-forth movement of the waves. Finally, Finland-based Wello Oy’s “rotating mass” device was deployed in the Bay of Biscay, generating electricity for the local grid. The Penguin 2 has an asymmetric hull shape, promoting rotation and driving a mass in the hull. Wello was established in 2008 and over the years has secured several essential patents.

The deployment over the past year of such a wide range of technologies, some of which are already supplying power to local electricity grids, promises to rapidly increase the percentage of our energy needs supplied by the oceans. According to the International Renewable Energy Agency, IRENA, ocean energy holds an abundance of untapped resource potential that could meet the current global electricity demand and the projected demand well into the future. Although most ocean energy technologies have not reached commercialisation and are still in developmental stages, as this graphic from a 2021 IRENA report shows, inventive activity in ocean energy technology has led to 24,000 patent applications being filed over the last twenty years, with wave and tidal stream dominating. It is exciting to see that Europe continues to lead the way, with European companies holding 66% of all patents in tidal energy and 44% of all patents in wave energy.

IRENA’s report states that, although the majority of ocean energy technologies are in the RD&D stages, an increasing number of companies, research institutes, universities and investors are showing interest in ocean energy technologies and are allocating resources to further develop them and to increase the installed capacity in the coming years. Marks & Clerk’s energy sector group provides a team of experts with experience across a wide range of renewables, including ocean energy technologies, and is ready to help business large and small use their intellectual property to achieve their commercial ambitions as they develop solutions to the world’s energy challenges.