The Beijing Higher People's Court recently upheld a lower court decision not to award damages despite a finding of unfair competition and infringement of Armani trademarks. The court found that the defendants were not subjectively at fault for the infringement and therefore not liable for damages. Case reference (2020) Jing Min Zhong no. 584.

The luxury fashion brand Armani opened its first retail store in China in 1998. By 2014, its annual revenues in China were more than RMB 1 billion (US$16 million). By 2017, Armani had 920 retail stores and outlets in 82 cities in China. The ARMANI brand had been recognized in China as a “well-known” trademark for clothing since 2016 in a trademark infringement and unfair competition lawsuit. Case reference (2017) Yue 03 Min Chu No. 1225.

Yang, a Chinese individual, forged an authorization letter from Armani and falsely claimed to be an Emporio Armani designer. In reliance on these fabrications, business owner Zhang entered into a commercial agreement with Yang in 2012. It was agreed that Yang would custom design the Armani branded clothing and take care of the Armani’s authorization, etc. and Zhang became the exclusive partner for the Emporio Armani brand in Greater China. Each party was to receive 50% of profits. Zhang sold the custom designed clothing items carrying the Emporio Armani brand through her three companies. Branded items were also promoted and sold over social media platforms and franchise stores. The clothing carried QR tags that, when scanned, displayed Yang’s signature and stated they were genuine custom-made Emporio Armani products. 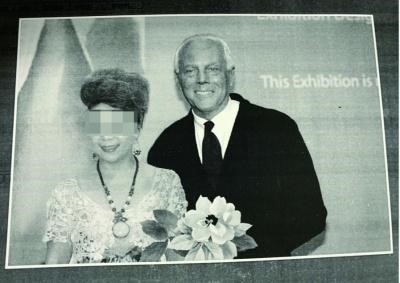 Fake photo of Yang with Giorgio Armani from a news report related to case series. 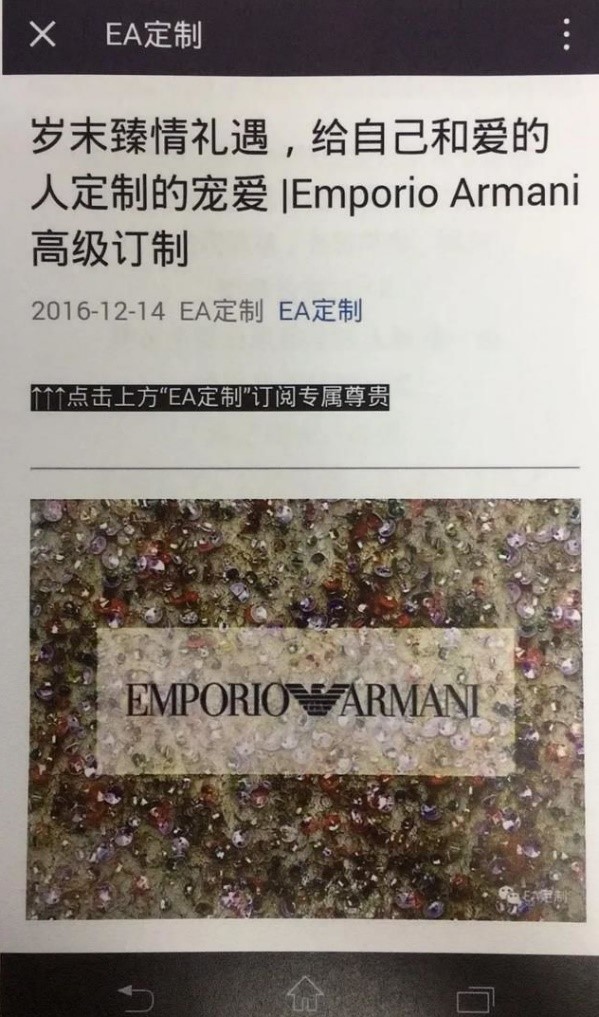 Screenshot of an article titled “Perfect End-of-Year Gift, Bespoke Pampering for Yourself and Your loved Ones | Emporio Armani Haute Couture”) (in Chinese language), published on the defendants’ social media account.

Zhang, who stated she had been misled, reported Yang to the police. Zhang claimed she only learned of Yang’s deceptions upon receipt of the Armani lawsuit. Zhang claimed to have been defrauded by Yang of more than RMB 2.5M (US$400,000). Yang surrendered to police and after two trials was found guilty of contract fraud and sentenced 12 years imprisonment. Yang was ordered to return fraudulent proceeds to Zhang and she was also fined RMB120,000 (US$20,000). Case reference (2020) Jing 01 Xing Zhong No. 76.

The Beijing Intellectual Property Court heard the trademark infringement and unfair competition case against Zhang’s three companies. Case reference 2017 Jing 73 Min Chu No. 440. A first-instance ruling in May 2020 found the defendants to have engaged in unfair competition and to have infringed Armani trademarks. But Armani were denied of damages. Armani appealed to the Beijing Higher People's Court. The second-instance decision, handed down in April 2021, upheld the lower court decision. Case reference (2020) Jing Min Zhong no. 584.

Armani argued that (i) the defendants had infringed its rights in its well-known trademark ARMANI by offering EMPORIO ARMANI branded custom tailoring services; (ii) the defendants’ use of ARMANI or EMPORIO ARMANI on social media and in stores for promotion and sales, and their misrepresentation of a relationship with Armani, intended to cause misidentification and confusion to the public and so constituted unfair competition; and (iii) the defendants, as seasoned operators in the apparel industry, were aware of the true ownership of the ARMANI brand and so the infringement was intentional. Therefore, the defendants should be liable for damages for the infringing activity.

The defendants pointed out that the court had already established Yang’s deceptive behaviour in the criminal case; Zhang was unaware of Yang's deceits because Yang had consistently presented herself as an authorized Armani designer. The defendants argued there was no subjective intent on their part to infringe or engage in unfair competition. Zhang had satisfied her duty of reasonable care by asking Yang for the Armani authorization letter, etc., not aware this was a document forged by Yang. The defendants’ subsequent sale and promotion of Armani branded clothing was simply performance of the agreement between Zhang and Yang. There was never any intent on the part of the defendants to infringe and they had immediately ceased use of the Armani marks and names on receiving the Armani lawsuit. As such, the defendants should not bear any liability for the infringement.

In providing the custom tailoring services, the defendants used ARMANI trademark and names on clothing and on store decoration. This infringed the plaintiffs’ trademark rights on ARMANI in respect of clothing etc. as the aforesaid services are closely relevant to clothing products. The defendants also constituted unfair competition due to false advertisement.

Trademark infringement is a tort also governed by the Tort Liability Law. Tort liability includes fault-based and no-fault based. In the absence of specific provisions of the law, the principle of fault liability should be applied by default. The Trademark Law only provides that sellers are liable for fault-based damages. As the defendants were not simply “sellers”, the provisions relevant to sellers in Trademark Law could not be relied on to determine the defendants’ liability. Instead, the Tort Liability Law should be applied. Under the Tort Liability Law, the perpetrator is liable for infringement only if there is culpability. Likewise, unfair competition is not a strict no-fault liability offence and the principle of fault-based liability should also apply.

In this case, the defendants’ offences were consequent on a mistaken belief in Yang’s identity and a result of Yang's fraudulent deceptions. The defendants did not intend to infringe, nor did they fail to exercise reasonable care. So the defendants did not have subjective culpability for the offences and accordingly should not bear any liability. The plaintiffs’ claim for compensation was not supported.

2. The facts found in the criminal case were not sufficient to prove that the defendants were not subjectively at fault for the infringement. The amounts of damages and expenses claimed by Armani are reasonable and well-founded. The lower court erred in holding the defendants not liable for damages.

The Appeal was rejected and the first-instance decision upheld.

The trademark infringement and unfair competition occurred as a result of contractual fraud committed by Yang against the defendants' owner, Zhang. The defendants did not have any subjective intent to commit trademark infringement or engage in unfair competition, nor did they fail to exercise reasonable care, so they were not subjectively at fault for these acts. As such, the defendants should not be required to compensate the plaintiffs for economic loss and/or reasonable expenses. The plaintiffs may claim damages separately from the person who was at fault for the infringement (Yang).

Two points are noteworthy in this case. Firstly, both the plaintiff and the court held that the defendants were providing custom tailoring services in Class 40, rather than custom-made clothing products in Class 25. Secondly, in determining liability for infringement, the court did not apply the provisions of the Trademark Law and the Anti-Unfair Competition Law, but instead invoked the Tort Liability Law, which takes whether the infringer is subjectively at fault as a prerequisite for determining whether the infringer is liable.

Under the name of Emporio Armani's "authorized" brand partner, the defendants solicited orders for custom-made clothing, which was then made to the clients' orders and sold to the clients with the promise that they were genuine Emporio Armani products. This differs from the common understanding of bespoke services, which do not usually use the service provider's own trademark, such as that of the tailor, on the final product. It would seem more consistent with commercial perception to regard the defendants as offering a custom-made clothing products from Emporio Armani, rather than a custom tailoring service.

2. No Infringement Liability for No Fault?

The Trademark Law already provides that compensation for infringement is calculated according to actual loss suffered as a result of the infringement, or by the benefit gained by the infringer, or on the basis of a reasonable multiple of a license fee. Compensation should include recompense of reasonable expenses incurred by the rights holder. The Anti-Unfair Competition Law has similar provisions. The infringer’s state of mind is generally not a factor in assessing whether to award damages and compensation.

Subjective malice is instead a consideration for increased liability for infringement. Malice coupled with aggravating circumstances can result in damages of up to five times the amount regularly calculated. However, there is no provision to the contrary, such as a reduction in the amount of compensation or exemption from compensation if the infringement was not committed in bad faith, the only exception being that a seller who sells infringing goods unintentionally and proves their lawful origin is not liable for compensation.

These provisions are in line with a general understanding of the legislative objectives of trademark and anti-unfair competition laws, which are to regulate the objective conduct of market players, rather than conduct reflecting their subjective state; as far as liability for infringement is concerned, no-fault liability is the principle, with fault-based liability as the exception, supplemented by punitive damages for serious malicious infringement.

In this case, courts of both levels found that the defendants were not merely the sellers, but also the manufacturers of the clothing products, and therefore the seller's exclusion clause in the Trademark Law could not be applied. It would seem, then, that the court should have invoked the infringement liability provisions of the Trademark Law and the Anti-Unfair Competition Law, which apply to non-exceptional situations, to determine the defendants’ liability in this case, rather than bypassing these two laws and instead making a rare reference to the principle provisions of the Tort Liability Law.

Yang’s deception of Zhang appeared to be a key reason that has operated to excuse liability of the defendants in this case. Although Zhang and her companies may have been victims of Yang’s serial deceptions, this does not mean that the defendants did not engage in infringing acts and unfair competition to the detriment of Armani, or that they are not liable for the infringement under the current provisions of the Trademark law and the Anti-unfair competition law.

If, in trademark infringement or unfair competition disputes, the infringer's subjective state must be assessed to determine whether liability is found, and liability for infringement may be determined from time to time under other non-specialised laws, then the provisions and application of the Trademark law and the Anti-unfair competition law will become questionable and unpredictable for the rights' holders.

The second-instance judgment is final and took effect immediately. Technically, Armani may still apply to the Supreme People’s Court (SPC) for retrial, but a retrial process will not prevent the enforcement of the judgment. It will be interesting to see whether Armani decides to petition the SPC to retry this case.

The article represents the views of the author and not the standpoint of the firm.